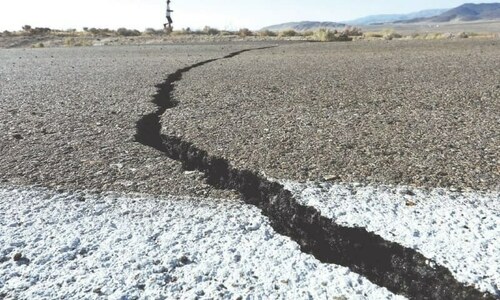 An earthquake of magnitude 6.1 that rocked Afghanistan has killed at least 130 people in the country's east, disaster management officials said on Wednesday.
The majority of confirmed deaths were in the province of Paktika, where 100 people were killed and 250 injured, said Mohammad Nassim Haqqani, the head of the Taliban administration's disaster management authority.
Deaths were also reported in the eastern provinces of Nangarhar and Khost, he added, as authorities check for further casualties.
According to US Geological Survey, the earthquake occurred at 1:54am (PST), about 44 km (27 miles) from the city of Khost, near the Pakistan-Afghanistan border, at a depth of 51 km. The shaking was felt over some 500km by about 119 million people in Pakistan, Afghanistan and India.
In Pakistan, tremors were felt in Peshawar, Islamabad, Lahore, Kohat, Mohmand, Swat, Buner and other parts of Punjab and KP.
People left their homes in panic for safer places. "It was strong," said a resident of Peshawar. There were, however, no immediate reports of damage or deaths.
The disaster comes as Afghanistan has been enduring a severe economic crisis since the Taliban took over August, as US-led international forces were withdrawing after two decades of war.
In response to the Taliban takeover, many governments have imposed sanctions on Afghanistan's banking sector and cut billions of dollars worth of development aid.