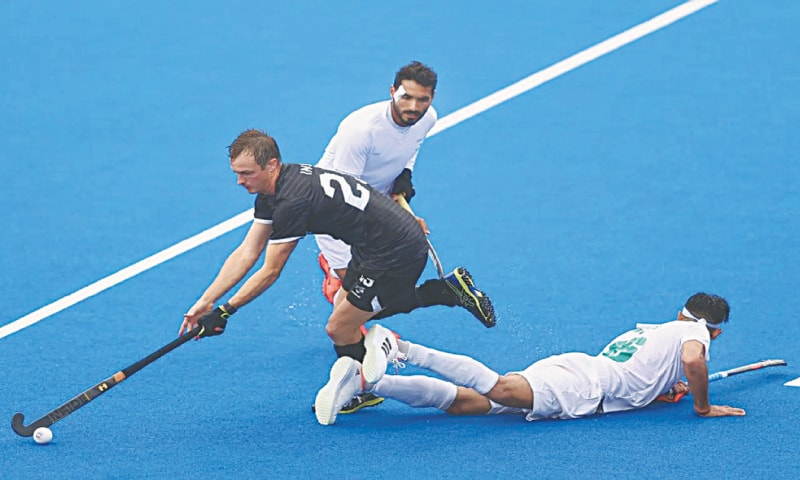 BIRMINGHAM: Pakistan’s hopes of getting closer to a semi-final berth took a hit when they were stunned 4-1 by New Zealand in their second Pool ‘A’ game of the Commonwealth Games hockey tournament on Sunday.
Once Hugo Inglis scored a quickfire double in the second quarter for New Zealand, there was no way back for Pakistan, who opened their campaign with a 2-2 draw against South Africa on Saturday.
With the top two sides from each of the two pools advancing to the last four, Pakistan now need to win their remaining two matches against Scotland and Australia to go through.
Six-time champions Australia got their campaign off to a flyer with a 12-0 dismantling of Scotland, who had drawn 5-5 with New Zealand on Saturday.
With defender Mubashar Ali suffering from a blow to the head during the match against South Africa and being cautiously used, New Zealand were able to exploit Pakistan’s defensive fragility to get a crucial victory.
Pakistan manager Sameer Hussain said the team needed to pick itself up for the remaining matches.
“Our defence was not at its best today due to Mubashar’s injury. We were compelled to rest him time and again during the match and send his replacements as he was not fully fit,” Sameer told APP.
“We also missed our chances to score goals. Yesterday, we played our first game and today the second one. But there are no excuses for it as we needed to win this match.
“New Zealand put us on the back foot in the second quarter and we could not really get back into it. We were not at our best today. We have to accept that. We will pick ourselves up and try to win the next two matches to qualify for the semi-finals.”
After a goalless first quarter, Inglis scored back-to-back goals in the 17th and 18th minutes for New Zealand. Pakistan got back into the contest when Ghazanfar Ali netted a splendid field goal just before the halftime whistle.
New Zealand, however, made sure of the result when Dylan Thomas got their third in the 43rd before Sam Lone put the icing on the cake when he made it 4-1 in the final minute of the match.