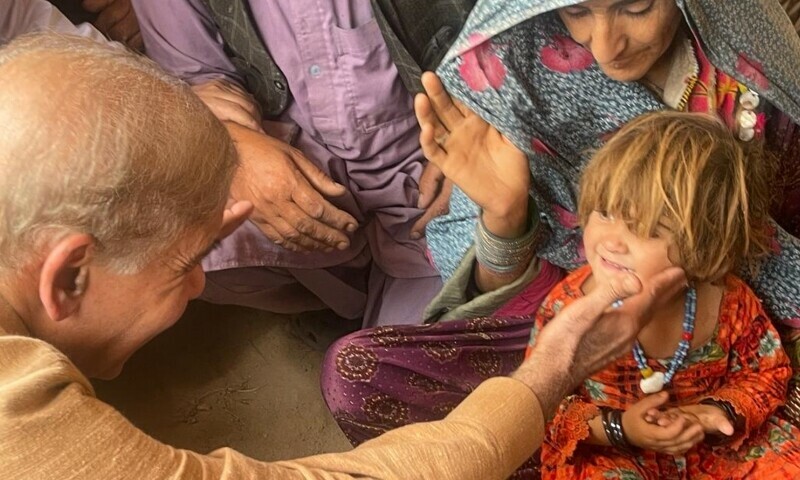 Prime Minister Shehbaz Sharif reached Quetta on a day-long visit on Monday to oversee relief operations in flood-affected areas of Balochistan.
The prime minister’s visit comes as nine more people died in rain-related incidents in Balochistan over the past 24 hours, taking the death toll to 136, according to the Provincial Disaster Management Authority (PDMA).
Speaking to the media during a visit to a tent city set up for flood-affected citizens in Qila Saifullah district, the PM sought action against officials for their failure to provide people with food and water.
“During my visit here and to other camps, I have been told the people are not being provided food and water […]. People clearly said they were not getting any food and water and when I asked them how were they managing, they said they had to send someone back home to fetch food,” PM Shehbaz said.
“It is extremely unfortunate that these camps are without food and water,” he lamented.
The premier said immediate action should be taken against the district administrations concerned, adding that Balochistan Chief Minister Abdul Qudoos Bizenjo had assured him that action would initiated against those responsible.
The prime minister said he had issued directives to ensure food was provided at relief camps from today.
CM Bizenjo, who was also present on the occasion, then directed the provincial chief secretary to suspend the officials concerned if food was not being provided at the relief camps.
“We were told people have been given one-month’s ration,” he said, instructing the chief secretary to probe the matter and suspend the relevant deputy commissioner (DC), tehsildar, PDMA in-charge and relevant team if food was not available.
“They are all suspended and action will be taken against them,” he assured the prime minister.
The chief minister reiterated that if proper relief was not being provided at any camp, the relevant DC and other officials should consider themselves suspended.
Earlier, the PM also expressed dissatisfaction over the absence of patients’ records at medical camps in tent cities and asked the CM to take action regarding this.
He further called for an inquiry to determine whether people were being actually treated at these medical camps or “if it was all on paper”.
He said the federal and provincial government would work together to rehabilitate families and the infrastructure affected by the rains and subsequent floods.
“The federal government has announced Rs1 million in compensation and the provincial government has already disbursed Rs1m,” he said, adding that a compensatory amount of Rs200,000 would be given for a partially damaged house and Rs500,000 for a completely damaged house.
He said a survey would be jointly conducted by the PDMA, National Disaster Management Authority (NDMA) and the provincial government to determine the extent of damage caused by rain-induced floods and further compensation would be given accordingly.
Prior to the media talk, the PM was briefed about relief operations in the area, DawnNewsTv reported.
During the briefing, which was aired on television, the PM was told that four relief camps had been set up in Balochistan — in Qila Saifullah, Quetta, Kech and Lasbela.
He was informed that livestock and crops had also been damaged but an accurate assessment of the damaged caused would be carried out after conducting a survey in the third phase of the relief operation.
This is PM Shehbaz’s second trip to Balochistan within the span of a week to oversee relief efforts.
He had visited the flood-affected areas of the province on Saturday and assured flood victims of all possible help and cooperation in their rescue and rehabilitation.

During their flight to Quetta, the NDMA chairman briefed the premier on relief and rescue activities under way in Balochistan.
He was later given a detailed briefing by the NDMA after landing in Quetta, following which is issued directives for the immediate disbursement of financial assistance to the families of those who lost their lives due to rains and floods, according to state-run Radio Pakistan.
The prime minister announced on the occasion that the government had increased the amount of financial assistance for individuals whose houses had been damaged by rains to Rs500,000, the Radio Pakistan report said.
It added that PM Shehbaz also instructed relevant officials to increase the number of medical camps in flood-affected areas to that people could get timely medical assistance.
He said heavy monsoon rains had badly affected the infrastructure in the province and caused loss of human life, assuring the both federal and provincial government were committed to rehabilitating every family affected by rains and floods.
Rains, floods wreak havoc in Balochistan According to the latest PDMA report, 136 people have lost their lives in rain-related incidents in Balochistan since June 1, while 70 others have been injured during this period.
Further, the authority said on Monday that several roads and bridges were washed away by floods. It said that a bridge connecting Lasbela and Sindh, which was damaged seven days ago, had not yet been repaired.
Roads linking Quetta to Ziarat, Chaman and Sibi had also been affected by rains, the authority said.
It said rains had damaged 13,535 houses in the province since June 1, out of which 10,129 were partially damaged and 3,406 were completely destroyed.
The authority said relief activities were under way in the province.
On Sunday, the situation had slightly improved in the province’s Lasbela district, which has faced the worst flooding so far, a Dawn report said. Subsequently, traffic on the Quetta-Karachi highway was restored after almost a week. The highway was badly damaged after collapse of three bridges earlier this month.

Weather forecast
The PDMA report also shared the weather prediction for the next 24 hours. It said that Zhob, Musakhel, Loralai, Dera Bugti, Harnai, Duki Kohlu, Ziarat, Chaman, Qilla Abdullah, Quetta, Mastung and coastal areas of Balochistan were likely to receives isolated heavy showers over the next 24 hours.
Rain-wind and thundershowers were expected in these areas, it said.
It added that while weather was likely to remain hot and humid in most parts of the province over the next 48 to 72 hours, Zhob, Barkhan, Loralai, Ziarat, Harnai and surrounding areas were expected to witness rains and thunderstorm.
All relevant authorities were expected to remain alert during the forecast period, the PDMA said.