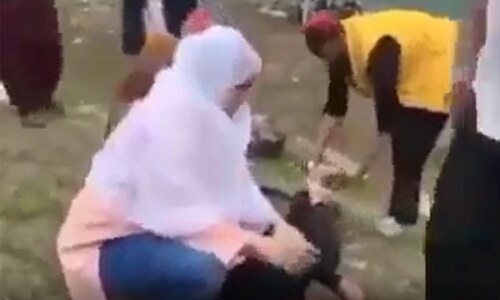 A boy, 14-year-old Arif Khan, fell in the Satrangi Lake while grazing cattle, after which his uncle Tariq Mir, 17, jumped into the lake to save his drowning nephew. However, while Arif Khan lost his life, the couple managed to save Tariq Mir by providing him with emergency medical aid. Israr Ahmad Chaudhary, a resident of Multan, told Dawn that he along with his wife, Dr Quratul Ain Hashmi, and other family members had reached Naltar by local jeeps at 12am on June 14. Tariq Mir jumped into a lake to save his nephew, who did not survive Upon arrival in upper Naltar, they saw some people gathered near the lake and screaming. Mr Chaudhary said he and his wife stepped out of the vehicle and noticed that Tariq Mir was just taken out from water and was unconscious.

The locals managed to pull the youth out of the lake, but he did not have a heartbeat and was unconscious because his lungs had been filled with water. The couple immediately started giving the boy cardiopulmonary resuscitation (CPR), a lifesaving technique that helps to keep the flow of blood and oxygen in the body when heart and breathing stop. They managed to save Mr Mir’s life and he gained consciousness after some time. Mr Chaudhary said his local driver, Muhammad from Nagar, jumped into the lake and also tried to rescue Arif Khan, but he couldn’t survive. Both the uncle and his nephew were residents of upper Naltar, a famous tourist destination in Gilgit-Baltistan.

A video of the couple trying to save the boy amid screaming family members went viral on social media, with people describing it as a heroic effort and an example of humanity. Social media users, politicians, professionals and journalists also appreciated the couple. Gilgit-Baltistan Chief Minister Khalid Khurshid paid homage to Dr Quratul Ain and her husband. By providing timely emergency medical care, the couple had saved a precious life which was highly commendable, the chief minister said.