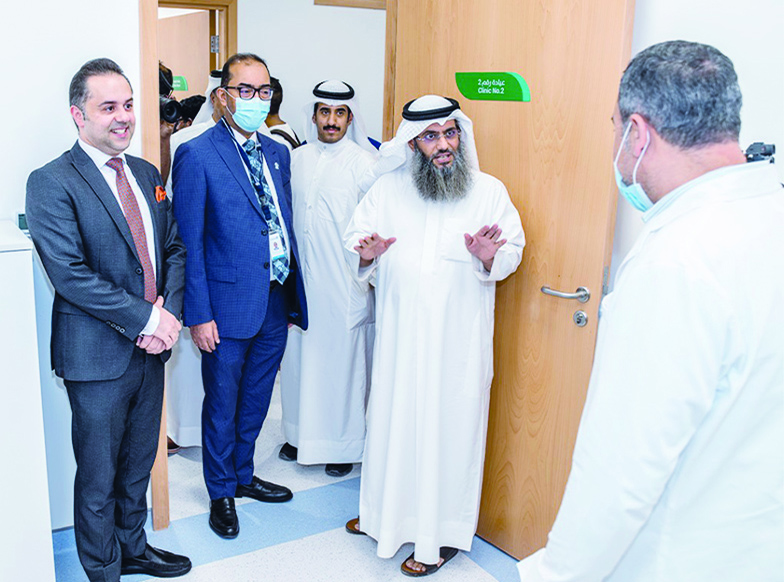 He added that it is the fourth of five primary healthcare centers planned for the company’s current operational stage. He emphasized that the planned centers are a core element of the firm’s drive to establish an integrated healthcare system that targets, in its final stage, three hospitals and 12 centers in all governorates.

DHAMAN’s CEO Thamer Arab speaks during the press conference. Speaking to reporters while opening the facility, DHAMAN’s CEO Thamer Arab said the company’s fifth center would be established in Fahaheel in Ahmadi Governorate. Arab added that it would be the company’s largest primary healthcare center, spanning over 4,000 square meters and covering 45 specialized clinics. Meanwhile, Spokesman of the Health Ministry Dr Abdullah Al-Sanad commended the new center as being a considerable addition to the country’s public and private healthcare system. He said the company’s health facilities would serve many citizens and residents, thus easing out pressure on the country’s current health system.

Spokesman of the Health Ministry Dr Abdullah Al-Sanad attends the event. “This will positively reflect on the quality of healthcare provided to citizens and residents altogether,” he said, pointing out continuing and fruitful collaboration between the ministry and the company in this regard. Since its establishment in 2014, Health Assurance Hospitals Company (DHAMAN) is the first Public-Private-Partnership (PPP) healthcare organization in the Middle East as it was founded upon Amiri directives as part of the national development plan “New Kuwait 2035”.

DHAMAN handles establishing an integrated healthcare system that includes medical insurance programs, as well as building and operating a network of primary healthcare centers and hospitals that cover all areas in Kuwait. The shareholder structure of DHAMAN consists of government bodies represented by Kuwait Investment Authority (KIA) and the Public Institution For Social Security (PIFSS) with 24 percent, a strategic partner from the private sector with 26 percent, and 50 percent of the Company’s shares were allocated for Kuwaiti citizens through an initial public offering. – KUNA