'How much does Babar Azam earn?' — and other most Googled questions answered by the Pakistan skipper 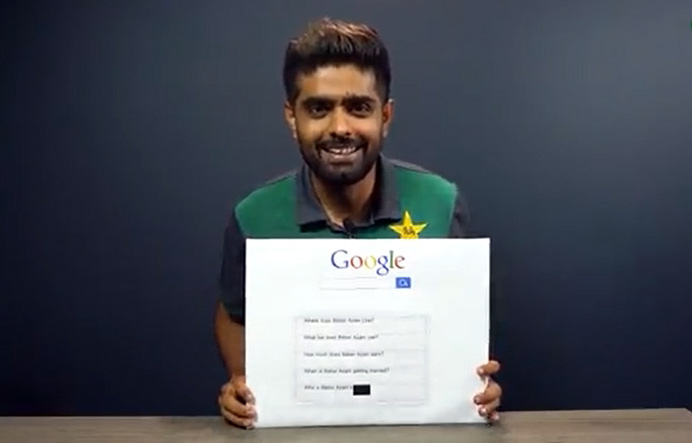 Being the MVP of Pakistan cricket, fans can never have enough information about the life and choices of Babar Azam. But what could be better than the skipper sitting down to answer some of the most asked questions about him, himself?

The 27-year-old did just that in a video shared by the Pakistan Cricket Board (PCB), candidly responding to the most Googled questions about his life and career.

Answering the first query, he said he lives in Lahore, and cited its traditional culinary specialities — paaye, in particular — as one of the city's standout experiences. Babar also noted that Lahore had produced some of Pakistan's most celebrated Test cricketers and sporting legends.

To another question, he said he uses the Gray-Nicolls bat, adding that he plays with bats of different weights depending on the venue.

"I carry 6-7 bats with me. The more bats I carry the more confused I get, but I use my best bats," the skipper revealed.

And how much does Babar Azam earn? The star batsman undiplomatically said he would not answer the question. "But it's less than you think," he cheekily added.

Answering another FAQ about himself, about when he will get married, Babar went with the safest of answers, saying in Punjabi: "Even I don't know that. My family knows, but for now the focus is on cricket."

About his cricket ideal, Babar said he admired former South Africa international AB de Villiers the most and had followed him from the beginning.

"He was one of the best players of his time [and] proved himself in every field," he said of De Villiers, who announced his retirement from all forms of cricket earlier this week.

Babar, who finished this month's T20 World Cup as the highest run-scorer (303), is the current top-ranked T20I batsman in the world. He was also the only Pakistan player in the Men’s T20 World Cup 2021 team of the tournament named by the International Cricket Council (ICC), and was nominated as its captain.

Justifying his selection to lead the T20 team of the tournament, the ICC said Azam's numbers spoke for themselves: 303 runs, an average of 60.60, and four half-centuries in six matches.

"Babar Azam’s T20 World Cup performance was remarkable. The fact that it was the Pakistan skipper’s first-ever T20 World Cup appearance makes his numbers even more astonishing, and he is comfortably the highest run-scorer at a debut World Cup in the history of the competition, beating Pakistan batting consultant Matthew Hayden’s previous record."

It said Babar also drew level with another record held jointly by Hayden and Virat Kohli, with his four fifties at a single World Cup equalling the all-time best.