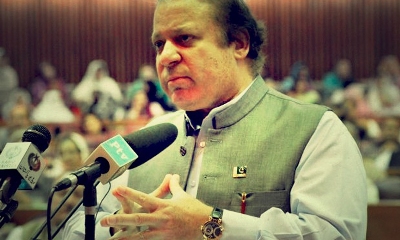 ISLAMABAD: Prime Minister Nawaz Sharif announced Wednesday that his government would pursue peace talks with Taliban militants despite a recent spate of attacks, naming a four-member committee to facilitate the talks.

Addressing a session of the National Assembly after a span of six months, Sharif said the government wanted to give peace another chance.

He said that Interior Minister Chaudhry Nisar Ali Khan would assist the committee.

Sharif also called on the militants to observe a ceasefire in the televised speech. He said that he would personally supervise the performance of the committee, adding that he was sincerely trying to restore peace in the country and expressed his hope that the other side would reciprocate in a similar manner.

Speaking to Dawn.com from an undisclosed location via telephone, Tehrik-i-Taliban Pakistan (TTP) spokesman Shahidullah Shahid claimed responsibility for the attacks.

Shahid said the Taliban have convened a meeting of the Shura (council) to “assess the committee formed by the federal government for peace talks.”

“Taliban are united under Fazlullah and rumours about rifts are baseless,” he said.

Sharif long has supported talks as the best way to end the years of fighting with the Pakistani Taliban. But after a spate of attacks in January, he has been under pressure to take steps to bring the country’s violence under control.

His speech came amid speculation that the government would soon authorise a large-scale military operation against militants.

Speaking to parliamentarians on Wednesday, Sharif said the entire nation – including all state institutions – stand united if the government decides to react to terrorism with full force.

“Since the other side has shown intent to negotiate, we also wish to give peace yet another chance,” he said, adding that bitter experiences of the past propelled the government to hold peace talks to bear fruit.

“The acts of terror must stop. Terrorism and talks cannot continue simultaneously,” he told parliamentarians.

He said peace was not a choice but the ultimate destination at which the government wanted to arrive and it would achieve it at all costs.

The prime minster said that all state agencies were also united on the stance that the war against terrorism must end.

In an apparent allusion to former military ruler General (retd) Pervez Musharraf, Sharif alleged that a dictator and his unconstitutional government had put the country in a despicable state.

The premier said his government was doing all it could to stop US drone strikes on its soil. However, he said that at the same time there was no justification for continuing the acts of terror in reaction to the drone strikes.

“Are the innocent children who fall prey to acts of terrorism, or the innocent civilians who die in such attacks, responsible for conducting the drone strikes?” he remarked. “Murder of innocent people cannot be tolerated anymore.”

Dialogue to be ‘open, transparent’

Sharif further said that he agreed with the proposals of opposition leaders to set a time-frame for dialogue and make it open and transparent.

“I desire that dialogue should be open and transparent. I appreciate the proposals of opposition leaders,” he said in response to points raised by leaders of two major opposition parties, the Pakistan People’s Party (PPP) and the Pakistan Tehrik-i-Insaf (PTI).

He said that to ensure transparency and take along all stakeholders, the federal government had included a nominee of the Khyber Pakhtunkhwa government in the four-member committee. “I hope Rustam Shah Mohmand will continuously be briefing Imran Khan and KP government on the progress of dialogue.”

“Moreover, I also invite the opposition leaders to sit with me and give their proposals. I am also ready to sit with you. Invite me to your residence and I shall come to listen to you. Your proposals will be supportive,” said the prime minister.

He, however, said he did not deem it suitable to give a time-frame to the dialogue process at this moment. “If the process proceeds, a time frame can also be set,” he said.

Rahimullah Yusufzai told news agency AFP: “Our role will be of facilitators and we will pave the way for negotiations between the government and the Taliban.” But he cautioned: “I am not attaching any expectations with the process right now because we are not aware of our mandate and other details, including the timeframe that will be given to the committee.”

Another member of the committee, Rustam Shah, said: “It is difficult to have an optimistic view about any success because of deep mistrust on both sides.”

”The success of the negotiations will depend on how much support the government gives to the committee and how wide its mandate is.”