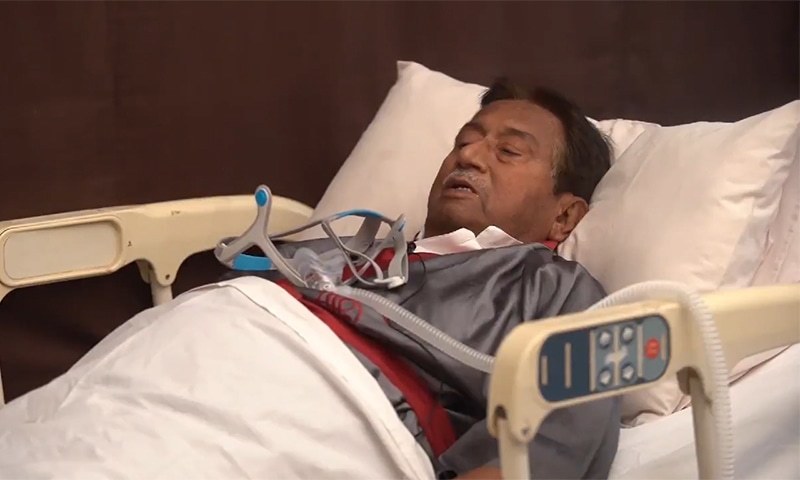 KARACHI: A day after the special court handed death sentence to retired Gen Pervez Musharraf for high treason, the former military dictator broke his silence on Wednesday evening and expressed his gratitude to the armed forces and the people of Pakistan for remembering his services for the nation.

In a video that showed him lying on a medical bed, Mr Musharraf also said that he would decide his future course of action after consulting his legal team.

“I have faith in Pakistan’s judiciary that they will provide me justice and keep in view the supremacy of law,” he said in a feeble voice.

However, he did not say whether he was considering returning home to challenge the special court’s verdict.

Following the Tuesday verdict, the Inter-Services Public Relations issued a statement saying “The decision has been received with lot of pain and anguish by rank and file of Pakistan armed forces. An ex-army chief, chairman joint chief of staff committee and President of Pakistan, who has served the country for over 40 years, fought wars for the defence of the country can surely never be a traitor”.

Mr Musharraf said that he had heard the news of the verdict on television. He regretted that it was a decision in which neither the defendant nor his lawyer was allowed to contest the charges.

Earlier in the day, a delegation of the Muttahida Qaumi Movement-Pakistan called on the former military dictator in Dubai and assured him of the party’s full support.

The MQM-P, a former ally of Gen Musharraf and the current partner of the Pakistan Tehreek-i-Insaf government, had already termed the special court’s judgement “extremely regrettable” and wondered whether the decision was connected to his “ethnic identity” as no such action had been taken against other military dictators.

A statement issued by the MQM-P on Wednesday said Karachi Mayor Wasim Akhtar, who is also deputy convener of the party’s coordination committee, along with coordination committee member and former MNA Hyder Abbas Rizvi called on Gen Musharraf in Dubai and inquired after his health. Mr Rizvi is currently residing in the United Arab Emirates.

“The delegation of the MQM coordination committee has informed the former president of their resolve to go to any length against the regrettable decision of the special court,” the statement said, adding that Gen Musharraf expressed his gratitude to the MQM-P leadership.

The delegation also prayed for early recovery of the former president, the statement concluded.

MQM-P leader Faisal Subzwari tweeted that the delegation also praised the services of Gen Musharraf for the country and Karachi.

Mr Rizvi told a private news channel that their meeting took place at a local hospital. However, he said he was not aware whether Gen Musharraf was admitted to the hospital or not.

The Karachi mayor had about three months ago met Gen Musharraf in Dubai, but at that time the MQM-P leadership declared it as Mr Akhtar’s personal engagement and even asked him to explain as to why he met the former president without informing the party.

It is worth nothing all other factions of the once unified MQM, including London-based Altaf Hussain’s, disgruntled leader Dr Farooq Sattar’s and former Karachi mayor Mustafa Kamal’s Pak Sarzameen Party, also came out in support of Gen Musharraf and rejected the court’s decision against him.