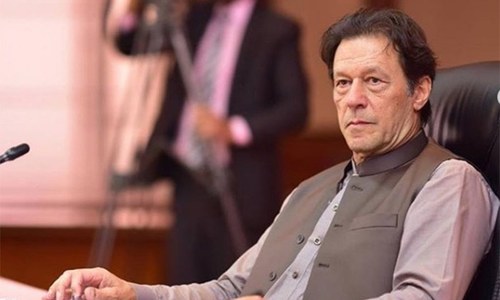 ISLAMABAD: Prime Minister Imran Khan said on Sunday Pakistan was committed to timely completion of projects under the China-Pakistan Economic Corridor (CPEC) and hoped that more Chinese companies would make investments in the country.

During his meeting with visiting Chinese Foreign Minister Wang Yi, the prime minister highlighted the importance of the proposed CPEC authority for speedy execution of the projects.

Mr Khan also briefed the Chinese FM on the situation in Indian-occupied Kashmir (IoK) and both agreed on more high-level exchanges between Pakistan and China to further promote bilateral ties and shared goals.

The prime minister hoped that as the CPEC’s benefits expanded, more Chinese companies would invest in Pakistan and help support Pakistan’s process of industrialisation and its policies of greater agricultural productivity and innovation.

He highlighted that CPEC was a project of great national significance that contributed immensely to revitalisation of Pakistan’s economy.

Mr Khan underscored that friendship with China was cornerstone of Pakistan’s foreign policy. He briefed the Chinese side on the evolving situation in IoK following India’s Aug 5 unilateral and illegal action to strip the region of autonomy.

He stressed that the ongoing curfew for 35 days and continued lockdown and communications blockade coupled with massive human rights violations had created a dire humanitarian situation in IoK which needed to be urgently addressed.

Prime Minister Khan said that the curfew and other restrictions needed to be immediately lifted.

To deepen strategic cooperation, Pakistan and China should continue their close coordination and consultation to ensure that peace and stability in the region was maintained, he said.

Wang Yi said that Pakistan-China relationship was based on mutual respect, trust and strong bonds of friendship. He appreciated Pakistan’s efforts to achieve goals of national development under Prime Minister Khan’s leadership, and extended China’s utmost support in this regard.

He noted that with the policies of the government, Pakistan’s economic and financial condition was improving.

Wang Yi emphasised that the CPEC, which was being jointly implemented by Pakistan and China, was a demonstration project of high quality Belt and Road Initiative (BRI) projects.

Wang Yi reaffirmed China’s support and reiterated opposition to any Indian unilateral action (regarding held Kashmir) as well as the measures by Delhi that could further complicate the situation.

Both leaders agreed that more high-level exchanges should continue to take place between Pakistan and China to further promote bilateral ties and shared goals of economic development, peace, and security across the region.

Earlier, the Foreign Office issued a joint statement at the conclusion of the two-day official visit of the Chinese foreign minister.

During the meetings, both sides had an in-depth exchange of views on bilateral, regional and international issues of mutual interest.

Both sides reiterated that the time-tested all-weather strategic cooperative partnership between China and Pakistan remained unaffected by any adverse regional and international development and continued to move from strength to strength.

Both sides reaffirmed that China-Pakistan relationship was a priority in their foreign policies, and committed to build a closer China-Pakistan community with a shared future in the new era.

Both sides agreed to maintain frequent mutual visits and meetings at the leadership level and continue to hold bilateral meetings between their leaders on multilateral occasions.

They noted that China and Pakistan had enjoyed mutual understanding and support on issues concerning each other’s core interests. They reiterated the resolve to implement consensus reached by the leadership of both countries to enhance strategic mutual trust and improve all-round cooperation to jointly promote regional peace, stability and prosperity.

The Chinese side reaffirmed its support for Pakistan in safeguarding its sovereignty, territorial integrity, independence and national dignity, in choosing its development path in light of its national conditions, in working for a better external security environment, and in playing a more constructive role in regional and international issues.

Both sides believed that the CPEC, as a pioneering project of the BRI, had entered a new phase of high-quality development. They agreed to continue to firmly push forward the construction of CPEC, complete its ongoing projects in a timely manner, and realise its full potential by focusing on socio-economic development, job creation and better livelihood and accelerating cooperation in industrial parks and agriculture.

Both sides expressed satisfaction over the close cooperation between the two countries at multilateral fora and resolved to deepen strategic coordination and consultation. Both sides reaffirmed their commitment to the purposes and principles of the United Nations Charter, and support for multilateralism, free trade and win-win cooperation. Both sides agreed to strengthen coordination and cooperation on regional and international affairs.

Both sides underlined that a peaceful, stable, cooperative and prosperous South Asia was in common interest of all parties and agreed that parties needed to settle disputes and issues in the region through dialogue on the basis of mutual respect and equality.

Both sides also exchanged views on the situation in India-held Kashmir.

The Pakistani side briefed the Chinese side on the situation, including its concerns, position and urgent humanitarian issues.

The Chinese side responded that it was paying close attention to the current situation in Jammu and Kashmir and reiterated that the Kashmir issue was a dispute left from history, and should be properly and peacefully resolved based on the UN Charter, relevant UN Security Council resolutions and bilateral agreements. China opposes any unilateral actions that complicate the situation.

Both sides agreed to strengthen cooperation on the Afghan issue and support Afghan-led and Afghan-owned peace and reconciliation process. Both sides welcomed the positive progress achieved in the negotiations between the Afghan Taliban and the US, and called on all Afghan political stakeholders, including the Taliban, to start intra-Afghan negotiations to form a future political structure acceptable to all parties so that peace and stability might be achieved in Afghanistan at an early date.