US enhances engagement with Pakistan 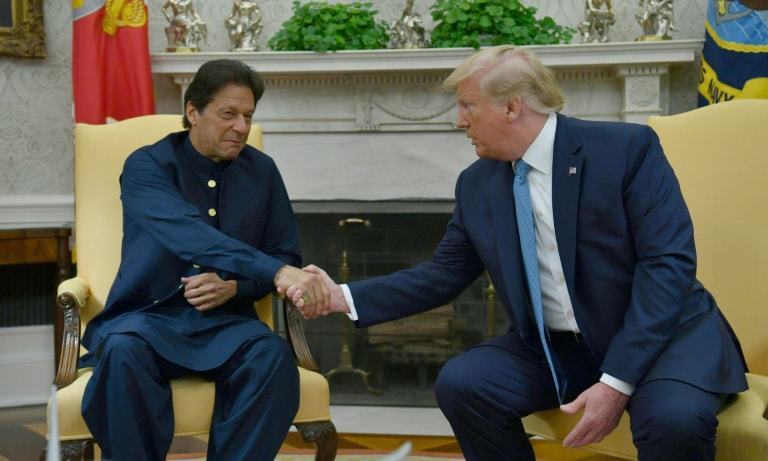 WASHINGTON: A US delegation will reach Islamabad on Monday for talks with Pakistani officials, as the Afghan peace process intensifies and could lead to a presidential visit to the region, if it succeeds.

Also, US special envoy for Afghanistan, Zalmay Khalilzad, arrived in Doha on Saturday to “resume talks with the Taliban”, he wrote in a tweet in Dari. “The Taliban have shown signs of a willingness to compromise. We are ready for a good deal,” he added.

Read: New round of US-Taliban talks opens in Doha: Taliban

In Washington, diplomatic sources told Dawn that Alice Wells, the Trump administration’s point-person for South and Central Asia, was coming to Islamabad for talks with Pakistani officials on Afghanistan and bilateral relations.

Trump may visit Islamabad if Afghan peace agreement is finalised

The sources said this would be a follow-up of the US-Pakistan consultations that began in Washington when Prime Minister Imran Khan visited and met US President Donald Trump at the White House on July 22.

They also said if the Doha talks led to an agreement between the United States and Taliban, President Trump might visit Afghanistan in September to finalise the deal.

And if Mr Trump visits Afghanistan, Pakistan would try to bring him to Islamabad as well to further strengthen the impression that relations between Islamabad and Washington are improving rapidly, according to the sources.

Although close allies once, relations between the United States and Pakistan deteriorated after May 2011, when the American intelligence discovered Al Qaeda leader Osama bin Laden in Abbottabad and a team of US Navy Seals took him out. But the ties began to improve late last year, when Pakistan persuaded the Taliban to hold direct talks with Washington.

Since then, the two sides have held eight rounds of talks in as many months and this weekend they began yet another. US-Pakistan ties got another boost last week, when President Trump met Prime Minister Khan and indicated in a joint news conference that he liked the new Pakistani leader and was looking forward to working with him to end America’s longest war.

Mr Trump also expressed his desire to mediate between India and Pakistan on Kashmir at the White House news conference and reiterated the offer on Thursday, saying he would “certainly intervene” to help resolve the 70-year-old dispute, if asked to do so.

Much of the new-found warmth in the US-Pakistan friendship, however, revolves around the Afghan peace process. President Trump wants to “extricate” the United States from this “crazy war” before the 2020 US presidential election, and hopes that Pakistan will assist him in achieving this target.

Asked at a briefing if the Taliban could be trusted, the US leader said: “I don’t want to say if they can be trusted or not. Look, history, I would say, is not so good, but they don’t like us much either.”

He said in the last few months, he had brought the number of soldiers down very substantially and now all sides would get “a lot of advantages” by making a deal on Afghanistan.

“Let’s put this way: We’re more police than anything else, and that’s not for our soldiers,” said Mr Trump while explaining why he was so keen on withdrawing American troops from Afghanistan.

“I’ve said — I’ve said it a lot. We could win the war, if you look at it — and you can look at it any way you want — we can win the war in Afghanistan in less than a week,” he added.

“But I’m not looking to kill 10 million people. I’m not talking nuclear. I’m talking conventional. But we’d win that war in less than a week, and I have that as an option, always. But that’s what we’re not looking to do,” Mr Trump insisted.