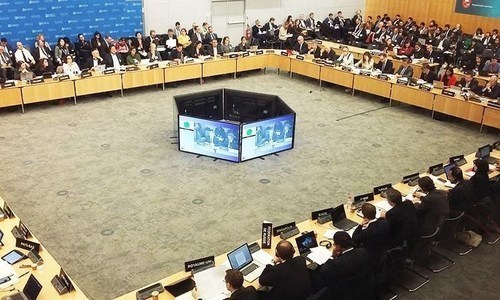 ISLAMABAD: Pakistan will fight its case before the Financial Action Task Force (FATF) on May 15 in Colombo, Sri Lanka, besides undertaking diplomatic efforts for performance-based review of its “robust” compliance with global standards against money laundering and terror financing.

This was the crux of an in-camera briefing to the Standing Committee of the National Assembly on Finance and Revenue. Finance Secretary Muhammad Younus Dagha, the Federal Board of Revenue (FBR) chairman, executive officers of the State Bank of Pakistan, Commissioner of the Securities and Exchange Commission of Pakistan (SECP) and representatives of foreign affairs and National Counter Terrorism Authority (Nacta) updated the committee on FATF compliance.

Pakistan has so far complied with 19 out of 28-29 FATF indicators and made progress on five indicators relating to legislative and administrative actions, the committee was told, according to informed sources. The sources also said the government was hoping to comply with remaining actions by June this year, some of them through the finance bill 2019-20.

Pakistan has complied with 19 out of 28-29 indicators

The committee was also told that the ministry of foreign affairs would engage with influential countries on the FATF including the US as well as the European Union for “performance-based review” rather than being assessed from a geopolitical prism, for which they already had taken the position with FATF President Marshall Billingslea.

Mr Billingslea serves as the Assistant Secretary at the US Treasury Department also, heading the Office of Terrorist Financing and Financial Crimes. In this capacity, he is responsible for policy development and international engagement pertaining to anti-money laundering and countering financing of terrorism (AML/CFT). He is reported to have assured Pakistan that its review would be based on performance and risk assessment without any political consideration.

Chairman of the NA standing committee Faizullah told journalists after the meeting they were satisfied with the government’s briefing on the FATF. He said the government was swiftly moving ahead with FATF conditions and hopefully matters would soon be settled. He said administrative and legislative steps were also being taken.

The committee said that nobody should be harassed or seen to be harassed as part of implementation of FATF conditions, Mr Faizullah said.

He said the government assured the committee that any official found harassing or misusing FATF conditions for ulterior motives would be dealt with strictly.

Earlier, Mr Dagha told reporters that a government delegation would visit Sri Lanka on May 15 to present its case to the FATF.

Responding to a question, the finance secretary said the IMF staff mission was expected to visit Pakistan between April 27 and 29 for discussions on its bailout package.

He declined to comment on the budget deficit target for next year saying the ministry was currently in the process of budget making and had not yet firmed up fiscal deficit numbers.

Responding to another question, he said the finance ministry was planning to present the federal budget in the last week of May but May 24 was not the target date as was being speculated.

While discussing the work plan assigned by the Special Committee on Agricultural Products for uplifting agriculture, the committee was briefed by the chairman of the Pakistan Agriculture Research Council (PARC).

He said that PARC has already proposed three research and development projects in the budget of the next financial year, 2019-20, with a total cost of Rs2bn.

The additional secretary, ministry of national food security and research apprised the special committee that Asian Development Bank (ADB) had conducted a knowledge creation exercise for the purpose of report publication in 2018 for “Punjab basmati rice value chain analysis” and currently, the ADB was working on “Punjab sustained agriculture growth through enhanced agriculture management” by means of a technical assistance, to ensure a $100 million loan soon.

The committee recommended to the food security ministry and the PARC preparation of a comprehensive presentation along with their recommendations for improvement in research and development in the agriculture sector.