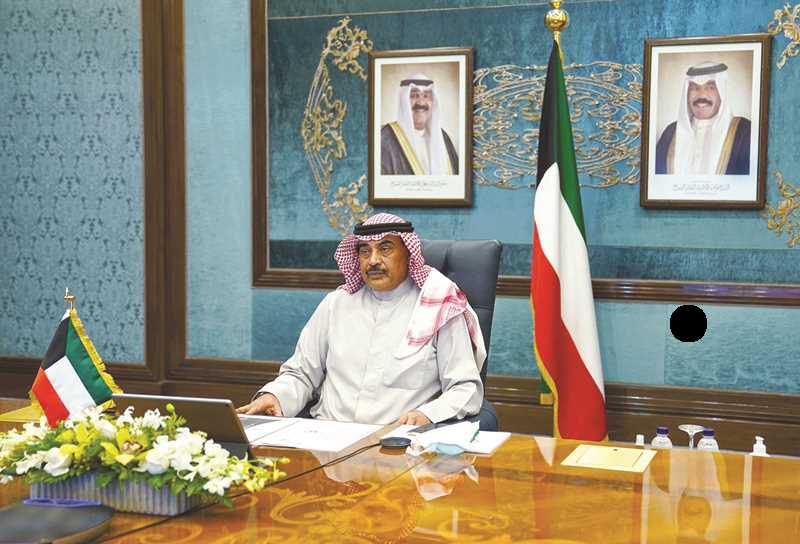 KUWAIT: The Cabinet gave its nod yesterday to allow the return of domestic helpers to Kuwait from all foreign countries in a move that could allow thousands of maids to return after they were barred by the coronavirus pandemic.
Health Minister Sheikh Basel Al-Sabah has meanwhile told the Cabinet that the number of deaths in the country from coronavirus has been increasing, but the number of cases at intensive care units has stabilized.

During its extraordinary meeting, the Cabinet approved a plan put forward by the authorities to allow the return of domestic helpers and asked the concerned authorities to complete legal aspects and detailed procedures for their return, according to government spokesman Tareq Al-Mezrem. The plan should be carried out while implementing all necessary health precautions, the Cabinet said, stressing on the need that all returnees undergo compulsory quarantine in special houses for two weeks.

The plan consists of two parts; the first involves the procedures of travel which begin with the sponsors registering their helpers online and then managing their arrival at Kuwait Airport and transporting then to the quarantines. The second part involves the financial affairs of the quarantines and other logistical procedures including transportation, catering and medical tests.

The Cabinet statement did not provide details about the cost of repatriating the maids, but it asked concerned authorities to complete the necessary legal procedures and the details of the plan. Kuwait has barred tens of thousands of expats from some 34 countries to return to the country over concerns of spreading the coronavirus. Those countries include India, Egypt, Pakistan, the Philippines, Bangladesh and Sri Lanka which have the largest expat communities in Kuwait.

In the meantime, the number of expats which was about 3.3 million before the outbreak of the coronavirus pandemic, has dwindled to just 2.65 million, Al-Rai newspaper reported yesterday, citing unnamed sources. The source said that the residences of at least 147,000 expats have expired during the pandemic and tens of thousands of expats departed for their home countries.

The sources added that as many as 365,000 expats who have valid residence permits in the country, are currently living abroad, adding that 132,000 expats are living illegally in the country and around 40,000 of them are expected to benefit from a new amnesty starting next month to legalize their stay.

Decision upheld
The lower court meanwhile upheld the interior ministry decision to bar seven candidates from running in next month’s election but scrapped similar decisions against eight candidates. The interior ministry two weeks ago disqualified 34 candidates from contesting the general election on December 5 on various grounds, mainly over final court verdicts involving financial cases. A number of those were disqualified for receiving verdicts on political groups.

Those whom the court confirmed their disqualification include former Islamist opposition MP Bader Al-Dahoum and opposition activist Ahmad Al-Fiker, both for being convicted for storming the assembly building in 2011 following an opposition protest. Others include candidate Hani Hussein, Nadia Al-Othman, Fadhel Al-Dabous and others.

Dahoum said after the verdict that he will challenge the ruling at the court of appeals. The courts must issue a final verdict on the case before the election date. Dahoum’s lawyer Yousef Al-Harbash said the ruling was wrong because it was based on a law issued years after his client’s conviction and the law does not apply to cases that happened in the past. He said he will file an appeal.

Those whom the court scrapped their disqualification include Salah Al-Hashem, the brother of MP Safa Al-Hashem. The two are contesting for seats in the third constituency. They also include candidate Ayedh Bukhousa from the fifth constituency and Talal Dashti, the son of self-exiled former MP Abdulhameed Dashti.

Head of the Judicial Council Ahmad Al-Ajeel Said yesterday that authorities are studying whether to ban those who were infected with the coronavirus from voting. The Cabinet was expected to decide on the issue.