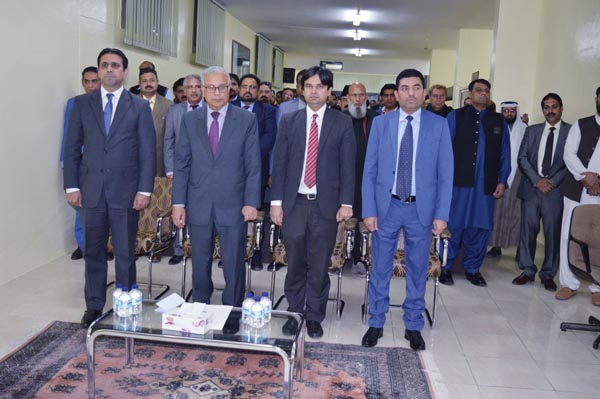 The Embassy organized an event at the Chancery today, 05 February 2020 to express solidarity with the people of Indian Occupied Jammu and Kashmir (IOJ&K) on the occasion of the Kashmir Solidarity Day.  It was attended by a large number of Pakistani and Kashmiri diaspora, including women based in Kuwait besides Embassy officers and officials.

The proceedings started with recitation from the Holy Quran. The National Anthems of Pakistan and Kashmir were played followed by a documentary depicting the plight of Kashmiri people at the hands of over 900,000 Indian occupied forces during the last more than seven decades. Messages of the President and Prime Minister of Pakistan were read out to the audience. Mr. Mishaal Akram, a young civil servant of Pakistan gave an overview of Kashmir dispute and recent important events.

In his address, Ambassador Syed Sajjad Haider said that this year’s Kashmir Solidarity Day has got an added significance in view of the illegal and illegitimate action of the Indian Government of revoking the special status of the State on 05 August 2019. He detailed the dire situation of the Kashmiri people after the August 05th developments and said that there is a complete lockdown in the IOJ&K for the last over seven months, thousands of people including political leadership of Kashmir have been arrested, thousands more young men have been disappeared by the Indian forces, people do not have access to health, education and communication facilities etc.

The Ambassador reaffirmed Pakistan’s unflinching political, diplomatic and moral support for the people of Indian Occupied Kashmir for their jut struggle for inalienable right to self-determination. He added that international community has to play its part to impress upon India to implement the UNSC resolutions for a lasting solution of the Kashmir dispute. He impressed upon the Pakistani diaspora to raise voice of the oppressed Kashmiri people at every forum and also highlight the Hindutva policy of the Modi government which has endangered the regional peace.